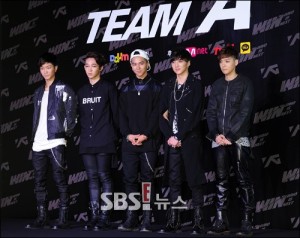 Prior to the group’s debut, the leader Kang Seung-yoon was a former Superstar K2 contestant and was part of the final 4. After much consideration, he decided to sign with YG Entertainment in 2011 and revealed he had chosen the company as he was impressed by their demands to return to training to “hone his craft”. In the same year he made his acting debut through the popular sitcom High Kick: Revenge of the Short Legged.In 2013, months before the airing of YG’s reality program, WIN, he had made a solo debut releasing multiple tracks notably “It Rains” which reached the top spot in multiple charts.

Lee Seunghoon, the group’s main dancer was also a former reality-singing contest alumni – K-pop Star Season 1 wherein he came in fourth place. YG recruited Lee himself, being one of the show’s judges and had shown great admiration for him – specifically for his choreography skills – during the series’ run.

Song Minho started out underground under the stage name “Mino” or “Hugeboy Mino” with former underground rappers-turned-idols namely Block B’s P.O, Zico and M.I.B’s SIMS. He was initially a trainee for the male group Block B but left the group before debut for personal reasons. In 2011, he made his debut as a rapper for the ballad group BoM under Y2Y Contents Company however the group was disbanded 2 years later due to company going bankrupt.  In 2013 he was recruited into YG through private auditions after being recognized from his acting debut in March 2012 in the cable drama The Strongest K-POP Survival in Channel A.

Kim Jinwoo attended “Joy Dance – Plug In Music Academy” also known as “Seungri Academy”, his senior label mate’s – Big Bang’s Seungri’s company. Seungri brought Jinwoo to YG after seeing his potential until he eventually got accepted as a trainee in 2010. Kim and Nam Taehyun – who was recruited in 2011 through a private audition – performed as backup dancers at the 2011 YG Family Concert.

After being announced WINNER

On October 25, 2013 at the finale of YG’s WIN: WHO IS NEXT, Team A won and will debut as the group ‘Winner’ under YG Entertainment. At the conclusion of the show it was announced that Winner along with Team B will immediately release 4 self composed songs on October 28, 2013 (2 from WINNER, and 2 from Team B) and they will then go on and tour with fellow labelmates Big Bang as the opening act for their Japanese dome tour which begins November 15, 2013.This is already a great achievement for the group as only top stars are able to perform in the dome. Winner is expected to debut as early as December 2013 or January of 2014.Their debut in both Korea and Japan is to be broadcast in the form of a reality show that will air in the middle of December through a cable channel.